“You think you students have some wild nights…you haven’t seen nothing yet” (Tim – one of the many homeless people living on the streets in Bournemouth, Easter Sunday 2018)

As part of a bigger project I’m working on I spent 25 hours on the streets in Bournemouth last weekend. Words can hardly do the gig justice, but they’ll have to for now…

Kick-off was 3pm outside McDonald’s where I met my mate Charlie. He had a bed for the night in a church through a fantastic charity called SleepSafe, but didn’t mind sacrificing it to spend the night with me.

For the first few hours we walked around, a lot. Charlie reckons he walks 15 miles a day on average, and I’d say this is an understatement if anything. Luckily for me, he is one of the best-known and respected faces in the hood, and so it wasn’t long before I’d met a whole host more homeless homies…and these guys know how to have a good time.

A particularly good crack was Kristov. Like me, but unlike Charlie (who doesn’t drink), Kristov always feels better off with a drink in his hand than without, and on the flip of a coin (had to be) he bought me the streets best – Omega white cider (89p a can). With these we discussed Hitler, Stalin, Russia, and why being homeless in Bournemouth is better than being homeless in Poland.

Via a couple of rounds of table tennis in the park we then headed to the soup kitchen for dinner. The number of people attending soup kitchens in the UK has rocketed in recent years, and no doubt it is a sign of bad times that so many people have to rely on them to get fed. Saying that, it was far more interesting, entertaining, and palatable than my most regular dinner routine of pasta with pesto without the company of 50+ other people.

And the soup kitchen is not just soup, not just food even. As well as a choice of various different breads, two options of soup, rice or pasta, a range of cakes, and an Easter egg each, kind donations provided toothbrushes, blankets, clothes, playing cards, and wet wipes (it was a blessing that I didn’t need a poo during the night – that wouldn’t have been fun). It was here where Charlie sorted a blanket for himself, and with these cards he taught me some tricks.

Sleeping on the streets it seems you pick up many tricks. Some definitely more useful to me (like how to open a bottle without using a bottle opener) than others (like picking up fag ends off the street to re-use the tobacco in them). Also I was taught a lesson when Charlie decided to hide my sleeping bag and blanket after I’d left them unwatched in the soup kitchen. I obviously had it covered because I knew he’d be watching  – but it was a good effort.

It seems that after enough time on the streets you even develop the ability to predict certain things will happen. Charlie had already predicted correctly that he’d be able to get a blanket from the soup kitchen, and then he correctly predicted that at some point on a bank holiday evening we might see some drunk girls flashing their tits that us. It wasn’t even 11pm, and it was cold and raining.

It was around this time we were camping up for the night in Charlie’s preferred spot – the doorway of Sports World. It wasn’t long before a Romanian chap on the other side of the street shouted over offering my second beer of the night. I assumed he’d want money for it, but I was wrong. He wasn’t even drinking himself and was on his way to work. He told us that in the last seven months he’d worked every single day so that he could send money home to his young family – who he only sees for two weeks every six months.

Our next visitor was Martin. Martin, like the Romanian chap, was not homeless. He had a crib up the road but thought it’d be nice on Easter day to come out with coffee, biscuits, and beers for those without a roof over the head. Also I think he wanted some company to enjoy his beers with – and I reckon he got more than what he bargained for.

Obviously I had to come clean pretty quick and explain that I was not in fact homeless. In top drunken humour he proceeded to call me a fake from there on, but in the end he proved no different. At around 1am he joked that he was leaving us for his nice warm bed. Then at around 2am he returned, with more beer, plus a pillow and duvet. He wanted to join as well. We chatted until about 3am, then when I woke at 4am, he was still there, then when I woke up at around 5am he’d left but kept his duvet and pillow for Charlie and I. Martin was a comedian and a hero.

As suggested, there was a lot of waking up in the night. At one point by a drunk bloke poking his head into our humble abode (doorway) screaming “WAKEY WAKEY” – which was a bit weird…but nothing compared to the 7am alarm of RICK ASTLEY. I couldn’t believe it. Obviously a strategic attempt to clear the likes of us out of the doorways, speakers (I think, although I’m still not exactly sure where the sound was coming from…perhaps I was actually just hallucinating) blurted out perhaps the most irritating song of all time. At least give us some Adele mate.

To escape Rick Astley we relocated to Primark doorway, but were moved on again from there at 8am. Then from 8-10 we settled for the doorway of a Santander bank. Thankfully banks are actually closed on bank holidays. And then Charlie made another accurate prediction. Given that there was a Gregg’s only two doors down, he predicted that somebody would buy us some hot drinks. Ten minutes later a nice lady did offer…and then another, then another.

It is actually insane – not how kind people are (I think the majority of people like the feeling of helping someone clearly less fortunate than them) – but how much of an impact these kind gestures can have on someone clearly less fortunate. Charlie does not beg for anything. He will accept coffee and cigarettes, but when he was offered money, which we both were, Charlie donated it to BH1 – a local charity supporting homeless people. What is most valuable to him, and I think to a lot of homeless people, are conversations.

For the remainder of the day we were joined by the Mancunian chuckle brothers aka Batman and Robin. Manchester council paid for these guys’ trains to Bournemouth to get them out of town – and it’s their loss. The original plan was 24 hours but the comradery of these guys stretched me to 25 with ease. It also occurred to me only on my way back home how little I looked at screens during these 25 hour compared to every other 25-hour periods of my life. Away from a computer, a TV, work (I feel like most jobs now require a fair bit of screen focus), and in such great company – I didn’t need to, and didn’t want to… 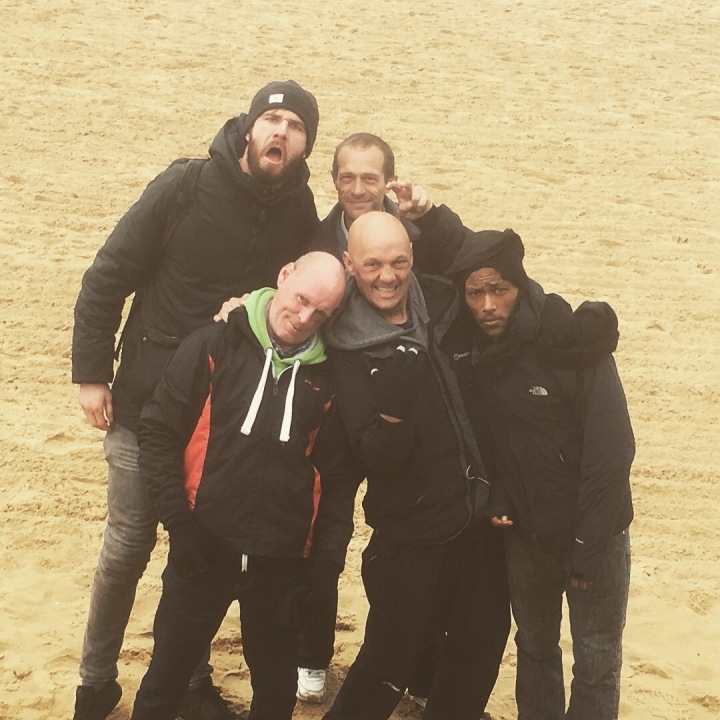 One thought on “25 hours homeless in Bournemouth”