Those of you knowledgeable of American Presidential history, or scandal, will recognise 1974 as one of the US’ most politically turbulent year, or it was until now. 42 years later Donald Trump has

42 years later Donald Trump has been elected US President, it has taken him five months to fire his FBI Director and find himself swamped in scandal. For Richard M. Nixon, the only US President to resign the office, it was Watergate; for Donald J. Trump it’s Russia.

The questions over Trump and Russia have escalated in recent days due to President Trump’s peculiar timing in the firing of FBI Director James Comey.

On 9th May, James Comey was reportedly speaking to FBI employees in Los Angeles when TV screens in the room started flashing with the breaking news that President Trump had fired the Director. At the time of his dismissal, Mr Comey was leading the investigation into whether Trump’s campaign colluded with the Russian government to alter the final outcome of the 2016 Presidential election.

As Democrats, and more Republicans than Trump would have liked, called for a Special Council to investigate Trump’s Russia connections. President Trump gave his reasoning for sacking Comey, as his handling of the Hillary Clinton private email server investigation. However, months earlier Trump praised Comey for his investigation into Clinton saying it took “guts” to reopen the investigation.

President Trump’s actions stirred great unease amongst many Americans. Some claimed that by firing Comey, Trump had committed “a brazen attack on the rule of law” and was continuing the work of Putin. Democratic Senator Bob Casey accused Trump of taking “Nixonian” acts as he recalled the dismissal of Archibald Cox, the special prosecutor on Watergate.

On the 10th May, President Trump welcomed Sergey Lavrov, Minister of Foreign Affairs of Russia, and Russian Ambassador Sergey Kislyak to the White House. However, the US media was locked out of the meeting with only Russian media being allowed access. The photo below, of the meeting between Trump, Lavrov and Kislyak, was only possible courtesy of TASS, the Russian news agency. This shutting out of the US media and welcoming of solely Russian media has only added to the fears of Americans that their President more concerned about satisfying President Putin that his own people.

Again the day after Comey’s firing, the New York Times announced that they had learnt that days before he had asked for more resources to investigate any Russian interference in the election. This request was the time Comey had made it clear to all that the bureau did not have the resources that the Russia investigation required. An act which made it clear how big Comey felt this investigation was. The New York Times also claims that Comey was fired directly because of his role in leading an investigation which would have brought “down a President“, and the impeachment of Trump.

Similarly, according to multiple FBI insiders, Comey was fired after

“he refused to end Russia investigation“, which had Comey “breathing down the neck of the Trump campaign.”

It was then revealed that only 7 days after Trump became the US President, he summoned Comey to the White House for a “one-on-one dinner with the new commander in chief.” At the meeting, Trump demanded the FBI Director “pledge his loyalty to him“, however, Comey’s response did not satisfy the new President. Instead of loyalty, Comey promised the President honesty. The President made these demands of Comey, after the FBI may have been investigating Trump and Russia for months.

As if he was not already in a bad enough position, Trump decided to he’d throw a little more fuel on the flames and Tweet… 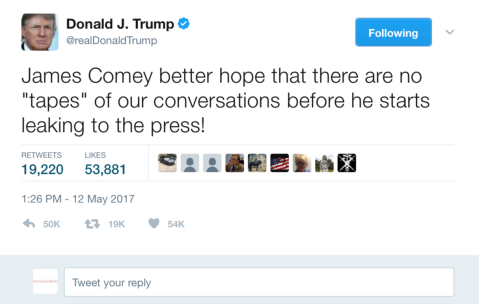 However, if Trump thought that firing Comey would help his cause and prolong his Presidency; then it would appear to be another Trump miscalculation.

Andrew McGabe, the acting head of the FBI, has already announced that Comey’s firing will not stop the agencies investigation into the links between Russia and the Trump campaign. In response to questioning from Marco Rubio, McGabe claimed: “the work of the men and women of the FBI continues despite any changes in circumstances.”

Additionally, former FBI Director Comey has been asked to testify before the Senate Intelligence Committee as a private citizen.

McGabe also stated that, although the agency continues regardless, as does the investigation; one thing has changed. The FBI will no longer routinely update the White House on the investigation.

So, the question remains; how long until President Trump becomes the first US President to be impeached or the second to resign under threat of impeachment?