This time last week the world watched the end of former-President Obama’s tenure as the leader of the free world, and the inauguration of President Trump. The seven days that have followed have potentially been the most controversial first seven days of a Presidency seen in modern U.S. politics.

So months of waiting and the day finally arrived for the millions of Americans to come out and show their support for the man who was going to ‘Make America Great Again’! Instead what we actually saw was less than a million supporters turn out to cheer for Trump. Something pretty well summed up when compared to the 2012 Obama inauguration. 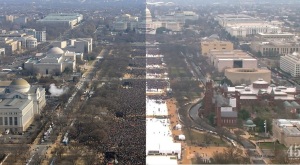 However, the pitiful turnout for Trump’s inauguration was only half the story. Instead, just a few blocks away from the ceremony, violent protests were breaking out. These protests saw 217 people arrested, including numerous journalists who were covering these protests, four of whom are facing felony charges.

The hours following his inauguration, Trump signed in his first two executive orders. The first of which froze all new regulation on federal agencies. While the second order was to start the dismantling or Obamacare and to ‘ease the burdens’ of the healthcare law.

@potus signs documents to allow Mattis and Kelly to be sworn in & exec order on #Obamacare pic.twitter.com/CdGcGlyfbI

On day 1 Trump also told the crowd at his inaugural ball that “enemies keep saying, ‘Oh, that’s terrible.’ But you know, it’s a way of bypassing the dishonest media, right?” It took Trump only a matter of hours as President before he began calling the critics of his Presidency ‘enemies’.

While an estimated 900,000 people turned up to celebrate the new President Trump, at least an estimated 1,000,000 people turned up in Washington DC alone to protest his Presidency. However, the protests were not limited to DC, with millions more across America and millions around the world also marching against Trump. Or in the words of comedian Aziz Ansari, “an entire gender protested against him!”

Photos of the Shady Grove Metro station currently. Hearing it’s an hour wait to get on the train. O____o #WomensMarch pic.twitter.com/YOaaQ41v1s

On the same day as millions of people protested the new President, the new White House Press Secretary used his voice for the first time. However, he did not use his voice to set out what the President hoped to achieve in the coming week, instead, Sean Spicer decided to declare that, against all logic and evidence, Trump’s inauguration “was the largest audience to ever witness an inauguration, period!”

In response to Spicer’s bizarre claim about the inauguration, the public went into overdrive about such a claim against overwhelming evidence. However, Spicer need not worry about public backlash as President Trump counsellor, Kellyanne Conway, was there to back him up. How? With the incredible invention of ‘Alternative facts’!

However, the sudden revelation that the world would have to get used an American President and administration happy to avoid facts, statistics and evidence. Instead of relying on ‘Alternative Facts’. Something which led to widespread mockery, and an embarrassing showdown on Meet the Press with Chuck Todd.

The Trans-Pacific Partnership had become the core of Obama’s Asian policy. However, TPP and its abolishment had also become central to the campaign of Trump and Bernie Sanders. 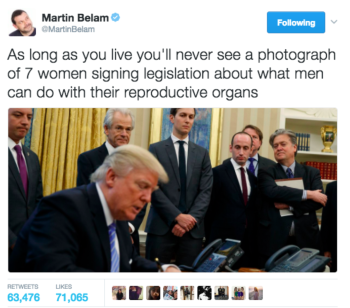 So on the 23rd, Trump’s fourth day, the President signed another executive order to begin the U.S. withdrawal from the trade agreement. An act which drew praise from Sen. Sanders. In a statement, Sanders said, “If President Trump is serious about a new policy to help American workers then I would be delighted to work with him.”

In another executive order, Trump made a huge statement on abortion! In a room surrounded by men, Trump signed the order to reinstate the Global Gag Rule. This meant that American taxpayer money will go to any NGO that in any from aids abortions.

Day 5! Out of Control Environmentalism! (24th)

The 24th saw Trump turn his attention to the environmentalists. Trump kicked it off by signing in further executive orders. One of which allows for and encourages further action to push through the Dakota Access and Keystone XL pipelines, despite the ongoing protests surrounding the plans.

However, the battle against the environment did not stop there. In a meeting with the CEO’s of the U.S.’s big three car manufacturers, Trump told them “that he was looking to ease regulations to help car companies and other businesses wishing to operate in the US.”  Trump went on to later claim that “environmentalism is out of control.”

Along with claiming environmentalists were going out of control, and with his administration’s invention of ‘alternative facts’, and of course the ongoing fear of the media and ‘enemies’. Trump also thrust a media blackout upon a number of government agencies including the Environmental Protection Agency. This blackout means that all incoming media requests are to be “screened” by the Trump administration, with press releases, blog updates, and posts to agency social media accounts also being banned.

On Thursday Trump declared his intention to lift the ban on overseas CIA ‘black site’ prisons. An action which directly reverses the action taken by Obama which was hailed worldwide by human rights advocates. Along with the allowing of ‘black sites,’ Trump will also block red cross access to wartime detainees. However, possibly most worryingly for human rights, Trump gave his full support for advanced torture techniques, such as waterboarding, without trail or evidence of guilt.

On the same day, Trump began his war with Mexico. Once again using executive orders Trump took the first steps in building his great wall on the U.S.-Mexico border, a keystone promise in his campaign. Along with building the wall, Trump also dropped in a paragraph which requires the Secretary of Homeland Security to “make public a comprehensive list of criminal actions committed by aliens” who have already crossed the border.

Meanwhile, Trump’s battle with government agencies, the media, and facts vs alternative facts took another turn with alternate government agency Twitter accounts getting more and more attention! Such as the Alternate US National Park Service, who have this Tweet pinned!

Can’t wait for President Trump to call us FAKE NEWS.

You can take our official twitter, but you’ll never take our free time!

If (when?) the time comes that NASA has been instructed to cease tweeting/sharing info about science and climate change, we will inform you.

Sean Spicer, I’ve said this to @realDonaldTrump and now I’ll tell you: Mexico is not going to pay for that fucking wall. #FuckingWall

The day also ended with the entire senior administration team at the U.S. state department resigning with immediate effect!

An act which gave the President Nieto a huge boost from the electorate who were more than happy to see their President stand up to Trump. The President Tweeted “This morning we have informed the White House that I will not attend the meeting scheduled for next Tuesday with the @POTUS.

So there it is Trump’s first seven days, some of the most aggressive, controversial, and populist days of any modern Presidency.

Choose Who You Want To Hear From

The opinions expressed on this site and in of the each articles are those of the author/writer. These opinions do not necessarily reflect those of Politically Wasted.