A woman who once had three trafficking victims imprisoned  for immigration. A woman who has spent much of her political career opposing and blocking legislation which would have guaranteed equality and human rights for all. A woman who has committed so much effort into blocking climate change law, the big oil companies of America would be proud of her. A woman who once claimed Gordon Brown had “no democratic mandate” and should call for an early election. A woman who so hates the freedoms the internet gives each and every one of us so much, she ignored parliament and put her prejudices ahead of democracy.

Having established who we are dealing with, it is important that we, as a country, do not ignore her claim that Gordon Brown has “no democratic mandate”.

Unelected prime minister Gordon Brown has “no democratic mandate” without an election, warns Theresa May in 2007. pic.twitter.com/OmHK9YpjXb

In fact so lacking in democracy is our new Prime Minister, that the Liberal Democrats have even updated their website in style! With the sudden withdrawal from the Conservative Party leadership election of Andrea Leadsom, as the last of the Brexit leaders departed from mainstream politics muttering something about politics being too hard in real life, which has led to May becoming our newest PM, many across the country are demanding a snap election. If we are to give Mrs. May any credibility as PM, or as an honest person to be trusted, many believe it is essential she should call for a snap election to provide herself with some form of democratic mandate.

If her own words are not enough to persuade you into believing the necessity of an early election that maybe her political history and beliefs will do it.

How about when only last year, in 2015, when a high court judge ruled that Theresa May unlawfully detained potential trafficking victims. The high court judge declared that the then home secretary failed to protect three people who were imprisoned at an immigration detention centre. May herself even admitted that she ‘failed to correctly identify victims of trafficking’, and that she ‘allowed the detained fast track (DFT) procedure to operate in a discriminatory way’.

Now how about when she starts attacking you personally? At the end of May (the month not the PM) of this year, Mrs. May actually voted in favour of repealing the Human Rights Act. Her reasoning behind why she wanted to repeal the law which guarantees your right to life, that the government will not torture you, your right to liberty and freedom which stops the government imprisoning you unless for a very good reason and even your freedom of thought, religion and belief? Well, your new Prime Minister believes that, something she is only allowed to believe because of this law, human rights legislation only serves to get in the way of government bu limiting its powers. This belief which May is trying to push upon the country is something which has drawn criticism from even her former fellow cabinet members. In 2013, May voted against a law which would have made it illegal for people to discriminate against people on the basis of their caste. Along with her blatant distaste for human rights she has avoided parliament votes on human rights legislation, many believe to avoid the illusion that the cabinet is split on human rights.

How about for you environmentally aware conservative voters. Well May has had a resolutely  negative approach to environmental issues. She has voted, generally, against measures which would find climate change. She was in favour of the UK’s recent and failed badger cull. She is also strongly against any environmental regulation for fracking in the UK. Maybe she isn’t quite the progressive conservative she has promised us she is.

Regardless of whether Conservatives, or the rest of the country, are happy with May and do not want an early election, nobody wants another PM who wears the tag of ‘evil’ or ‘villain’. Well it turns out that is exactly what we have. Theresa May rounded of a good 2015 of arresting trafficking victims with the award of ‘Villain of the Year’, an award given to her by the internet industry. Now as proud of this award as May maybe, it may not be a title the rest of us would be too proud to wear, unless maybe you are Gru from Despicable Me! 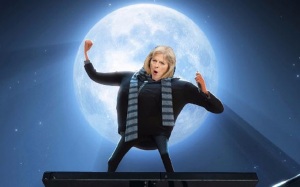 “But what did she do to earn this award?” I hear you cry!

Well, one of the most contentious pieces of legislation she spearheaded during her time in the Home Office is the Investigatory Powers Bill, nicknamed the ‘Snoopers Charter’! The bill is the updated version of the failed Communications Data Bill.

So why is the ‘Snoopers Charter’ so bad? Well the bill means that internet companies regardless of their size would have to keep your internet and social media use data for up to a year. This data can then be accessed by the government and UK law enforcement with a warrant when a ‘compelling need for information’ is displayed, however the lines for what is and is not compelling are very, very blurry. Along with this the legislation would require, that once a warrant is granted, communications firms are legally required to help the government agencies access data on suspects’ smartphones and computers. Basically, the government could force companies to hack your own personal device. Further to this, all police forces will be permitted to carry out “equipment interference” under the new regime, with a code of practice to be issued to regulate use of “more sensitive and intrusive techniques”. Which to you and me means, taking data from your computers and devices either during a search or by remotely hacking into the device. So more ‘legal’ hacking by the your ‘democratic’ government’ on its own citizens. The legislation also means that spy agencies (the government) can spy on journalists, other MPs, doctors, religious ministers and lawyers. The legislation would give the agencies the power to learn exactly what an MP says to a journalist, where they said it and for how long they were talking.

Now I personally can not see any legitimate or sane reason why the government should be allowed any of these powers and why I should need to surrender my own civil liberties and human rights, but I suppose now that May is our PM that we live in a dystopian future, such as ‘V for Vendetta’, where we live in a dictatorial democracy. However, the reason the public has been told behind these measures is that they will protect us from the scary people and terrorists. Wow I actually feel like I am writing the script for ‘V for Vendetta’ now! What is next a curfew? Or, maybe we should start shutting our borders? Maybe make England for the English? How about we start experimenting on those who protest against the government on civil liberties?

So I will leave the decision to you. Do you want an early election? Or, do you want Theresa May to remain as the uncontested Prime Minister?